Two airports are located within the New York City limits:

One airport is located in the neighbouring state of New Jersey between the cities of Newark and Elizabeth : 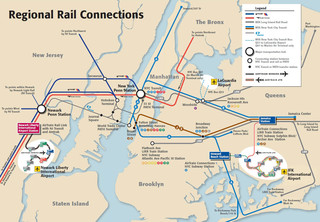 If you are planning a trip to NYC, you will need to define which New York airport you will arrive and depart from. Here is a map showing the location of New York City's 3 airports and their possible connections to Manhattan and how to get there.

New York City has three airports: JFK, La Guardia and Newark. The map shows you all the transfer options available to you to get to Manhattan. 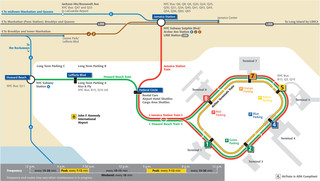 The airport of John F Kennedy also known as JFK is the most important American airport located 11 miles (19 km) of Manhattan. It is the 17th largest airport in the word for passenger traffic with 49 million travelers in 2012. It has 6 terminals which are terminal 1, terminal 2, terminal 4, terminal 5, terminal 7 and terminal 8.

New York's John Fitzgerald Kennedy International Airport is located in the southeastern part of the borough of Queens, 26 kilometers from downtown Manhattan. More than 49 million passengers pass through it each year, making it the 17th largest airport in the world. JFK is home to approximately 80 airlines, including Delta Airlines, JetBlue Airways and American Airlines. The airport is managed by the Port Authority of New York and New Jersey.

If you are landing at or departing from JFK Airport, there are several options for connecting to Manhattan: train, bus or taxi. 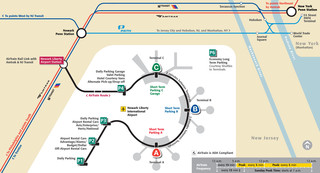 The airport of Newark Liberty International also known as Newark is an American airport located 14 miles (24 km) south west of Manhattan. It is the 2nd largest airport of NYC for passenger traffic with 35 million travelers in 2013. It has 3 terminals which are terminal A, terminal B, terminal C.

Newark-Liberty International Airport is located in the western suburbs of New York City and the Hudson River between the cities of Newark and Elizabeth in the state of New Jersey in the United States. It is the oldest New York airport still in use. It is a major connecting hub for United Airlines and FedEx. You will find many international airlines such as Air France, China Airlines, Aer Lingus...

To get to or from the airport, you have several options: 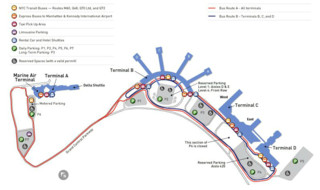 The airport of New York La Guardia also known as La Guardia is an American airport located in the north of Queens. It is the 3nd largest airport of NYC for passenger traffic with 26.7 million travelers in 2013. It has 3 terminals which are terminal A, terminal B, terminal C.

New York's LaGuardia Airport is located in the borough of Queens, New York.

It is the smallest of New York's airports and has no immigration or customs services. It does not serve international flights except to Toronto, Montreal, Ottawa and Halifax, the Bahamas, Bermuda and the island of Aruba. However, the airport's proximity to downtown Manhattan makes it a busy airport. It is managed by the Port Authority of New York and New Jersey. You will find mainly US Airways and American Airlines.

You can choose between taking a taxi or the NYC Airporter bus to get to LaGuardia. The Go Airlink NYC shuttle bus runs to Grand Central Station, Port Authority Bus Terminal, Penn Station and Bryant Park. Please note that there is no subway connecting the city to LaGuardia Airport. You may choose to take a bus (the M60 or Q70) which connects the airport to some underground lines. If there are several of you, we suggest you take the Go Airlink NYC or a taxi for added convenience.