You can find on this page the map of New York City bike route and the map of NYC Citi Bike stations. The city of NYC has undertaken considerable efforts to develop the use of bicycles by creating miles of trails and bike paths, a system of bike sharing and also cycling routes to move easily in New York City.

Cycling in New York City is an increasingly popular activity. New York, and especially Manhattan, offers many opportunities for cyclists: multiple bike paths, Citi Bike, bike rentals... Cycling along the two rivers or through Central Park will allow you to discover the sights in a relaxed way. With the increase in the number of bike rental agencies over the past few years, bike rental rates in NYC have decreased. Bicycle hire costs only a few euros per hour. Some popular rides cross the Brooklyn Bridge, ride along the Brooklyn Esplanade and the Hudson River or take you to the east side of Manhattan and Central Park.

The New York City bike network is about 170 miles (270 km) thanks to a strong policy to develop the dedicated cycle path initiated by the city of NYC. Many dedicated lanes for cyclists have been built to facilitate coexistence with motorists. Bike routes were created to help people enjoy the city.

There are many bicycle paths in New York City, with more than 1600 km: the avenues have green bicycle lanes and the streets have lanes marked with lines and pictures of bicycles. However, you have to be careful when cycling, New Yorkers park their cars there and you'll have to navigate between the yellow taxis and trucks. Use the official map of all bike paths in NYC available on this page.

Are bike rides in NYC safe? Yes in Central Park if you stay on the bike paths and follow the rules. Brooklyn has the most bike paths. The ride across the Brooklyn Bridge through Brooklyn is also a safe option. Note that pedestrians crossing the Brooklyn Bridge tend to use the bike paths as well. On the other hand, cycling through Manhattan is more risky. We do not recommend it if you are traveling with young children or if you are not too experienced.

The rules to follow are equivalent to those found in other cities. Unlike adults, children under 14 years of age must wear a helmet. In New York City, cyclists must stop for pedestrians. Riding on the sidewalk is prohibited and cyclists must obey the rules and the red light. It is recommended that you indicate with your arm that you are going to turn and always stay on the bike lanes. 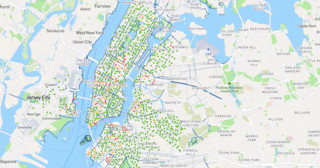 Citi Bike is the public bicycle sharing system in New Yor City (USA) available since 2013. Established by the city of New York, the Bixi system is operated by Alta Bicycle Share and sponsored by CitiGroup. The network is available in Manhattan and Brooklyn and proposes a fleet of 10,000 bicycles spread over 600 stations which attracts over 42,000 users per day on average.

When traveling in NYC, you can either take a day pass for $12 or a 3-day pass for $24. Afterwards, you can use a bike for free for 30 minutes every 24 hours. Beyond that, you will be charged $4 for each additional 15 minutes. Be careful, however, because if you intend to ride for several hours, it will be expensive. It may be more interesting to rent a bike than to use the service. Citi Bike is more for New Yorkers who want to make a trip of less than 30 minutes in the morning to work and a trip in the evening to get home.