The bus is a good way to discover New York City. Buses are blue-white in color, they have a number and a letter and a digital sign that displays the destination. The letter indicates the neighborhood in which the buses travel: Manhattan (M), Brooklyn (B), Queens (Q), Bronx (Bx) and Staten Island (S).

The NYC bus map is separate from the subway map, you can download it to help you find your way around. Buses run 24 hours a day and follow streets from East to West and avenues from North to South. Make sure your bus goes all the way around the map. At night, from 10pm to 5am, you can usually ask the driver to drop you off outside the stops indicated as long as it is on his route.

The NYC bus network which transports 802.5 million passengers per year, exists since 1919 and is operated by MTA (Metropolitan Transportation Authority). Its network includes a fleet of 5,700 buses divided into local buses, express buses and rapid transit buses.

In New York City, bus service is provided every day, 24 hours a day, and there are more than 3,700 buses in the city. Buses are marked with a route number and an indication of where they depart and where they are going.

Buses in Manhattan bear the letter M before the number.

Be careful, some buses are called "Express" and only stop every 10 blocks. Convenient to save time as long as you don't miss your stop. 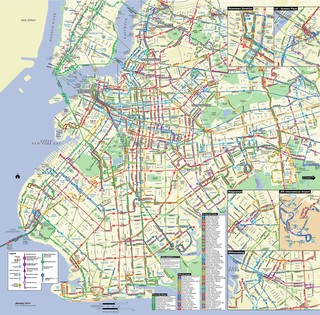 The Metropolitan Transportation Authority (MTA) operates a number of bus routes in Brooklyn. Of the 55 local lines in Brooklyn operated by the New York City Transit Authority, about 35 are direct descendants of one or more streetcar lines. The remaining lines are new bus lines and emerged in the 1930s. Only the eastern section of the B82 (now B50), B83 and B84 were created by New York City Transit from scratch (in 1978, 1966 and 2013). 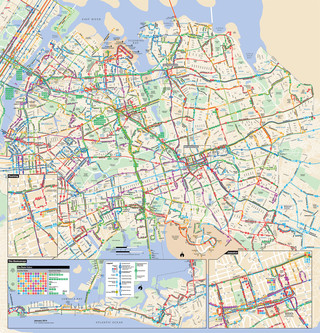 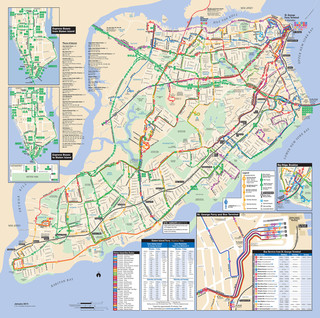 A number of bus routes in Staten Island are managed by the Metropolitan Transportation Authority (MTA). Some of these Staten Island lines are direct descendants of tram lines. Many lines go to the St. George Terminal, northeast of Staten Island, where there are connections to the Staten Island ferry. 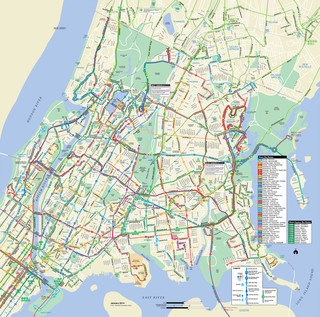