New York's five boroughs each have their own particularities and charm. The main tourist sites are located in the borough of Manhattan. You will find Central Parc, Times Square, the business district of the Financial District, the Empire State building and a magnificent view of the Statue of Liberty. Discover NYC's most emblematic museums such as the MOMA, the MET and the Guggenheim Museum. Then board a yellow taxi to discover Brooklyn, Queens or the Bronx which offer very different landscapes and interesting visits. All our maps of the monuments are free of charge to help you plan your trip.

In New York City you can visit:

Nyc hop on hop off

The Big Bus of New York City is an original way of visiting NYC and discover its monuments, museums, attractions while getting on and off at your disposal. This concept of hop on hop off bus or open-top double-decker buses offers a network of 2 tourist tours and routes and 30 stops with commentary in 10 languages.

The Big Bus tour takes you to the heart of Manhattan to discover all the points of interest and monuments of the borough: the Empire State Building,Times Square,Central Park and the Statue of Liberty. Big Bus New York is the only sightseeing bus offering live commentary in English (pre-recorded in 10 languages), Wi-Fi and access to over 25 bus stops throughout the city so you can get on and off whenever you want. The buses are double-decker and open-top. You can see the different routes and all the stops on the map.

City Sights NY is a second hop on hop off bus company with open roofs to discover the city of NYC via a tour. City Sights NY offers 6 lines, 4 tourist bus lines and 2 river cruise lines. Tours are commented in 9 languages.

The CitySightseeing New York City buses pass by all the must-see sights in Manhattan and Brooklyn. 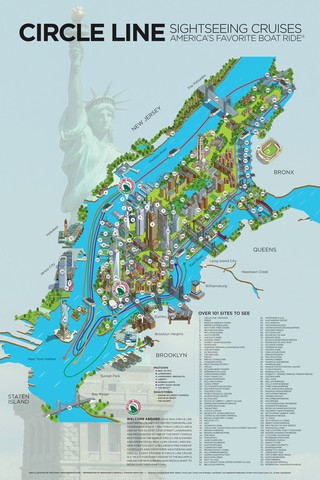 The Circle Line Sightseeing of New York City is a regular river hop on hop off shuttle service transporting passengers on the Hudson River and East River to visit New York City.

With Circle Line cruises you will discover the sights of New York while enjoying a cruise. All Circle Line cruises depart from Pier 83, near the Intrepid Museum. Each cruise will allow you to enjoy views of Manhattan's skyline, the One World Observatory, the Statue of Liberty and Ellis Island.

There are several Circle Line sightseeing cruises in NYC :