You can find on this page the map of New York City subway. NYC subway, tube or underground is a transit system serving the city of New York City (United States) with the urban, suburban & commuter train, the bus or the ferry. The subway network has 24 lines and 422 stations forming a rail network of 1,452 miles (2,337 km).

The New York subway system is named by letters A, B, C etc. and by the numbers 1, 2, 3 etc. The lines serve The Bronx, Manhattan, Brooklyn and Queens. New Yorkers call subway lines trains. The New York City subway is the world's largest network (in kilometres of track) and the fifth largest in the world in terms of the number of passengers per year. Historically, NYC's subway is the second largest in the United States, after Boston's (the oldest). 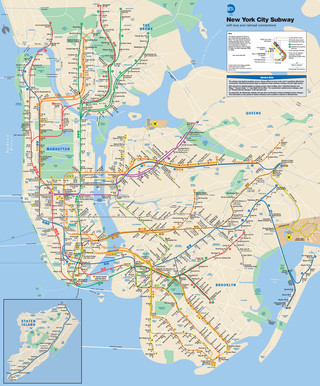 New York City subways which transport 5.3 million passengers per day, exist since 1904 and are operated by the MTA (Metropolitan Transportation Authority).

Its network includes the following 23 lines:

It's pretty easy to take the subway in New York City. You will need a subway map with all lines and stations like the one shown on this page. You will be able to view the NYC subway map, even offline, from this site or download the map as a PDF. Free subway maps are also available at many stations.
On the NYC subway map, a black dot means it is a local train and a white dot means it is an express train. Local trains stop at every station and express trains stop at every two to five stations. To get to New Jersey, you can take the PATH train.

Subways run every 2 to 5 minutes during rush hour, every 10 to 15 minutes during the day and every 20 minutes at night. During the week, rush hours run from 7:30 a.m. to 9:30 a.m. and from 4:30 p.m. to 6:30 p.m. Remember to read the information in the metro stations carefully, as due to work at the weekends, timetables may be subject to change.